I envisioned many different situations  en route to a recent assignment covering GOP presidential nominee Donald Trump’s trip to Houston. But my list didn’t include what I saw at the end of the exhausting night: democratic debate.

Trump first stopped by Houston attorney Tony Buzbee’s River Oaks home for a fundraiser, where attendees forked over thousands for a few moments with the mogul. Across the street from Buzbee’s lot, Houston police officers cordoned off protesters on one corner and directed Trump supporters to another.

The two sides had a terse face-off – protesters blasted Tejano music while Trump supporters spoke to reporters – at the fundraiser, but there wasn’t much actual interaction.

I then headed to Trump’s rally in The Woodlands, which attracted thousands of people. The line to get in started to form many hours before the 7 p.m. rally, and many people who’d waited in line in a scorching mall parking lot didn’t get in.

Since Trump has yanked The Washington Post‘s credentials, I covered the scene outside of the Waterway Marriott. While there were reports of a person temporarily detained, I found people to be fairly calm. Law enforcement saturated the area, directing traffic and keeping watchful eyes on people expressing their opinions.

I had been expecting confrontations to get heated after Trump’s audience filtered out, and there were passionate exchanges. But again, I found that law enforcement was vigilant while allowing for discord – at least once even standing between the two sides as they debated over metal barricades.

As the night went on, many people left, but plenty of others stayed. I spent my time floating from one group of debaters to another, staying to get the gist of the arguments:  immigration, LGBT issues, gun rights. All around me were clusters of people – again, with police watching closely – debating politics, of course some more crassly than others. I saw college students, hijab-clad women, people who were physically impaired and folks of all races, ages and shapes. Just as moviegoers might discuss a film on the way out of the theater, rally-goers and protesters seemed to want to talk it out, too.

Eventually, officers asked people to leave and the crowds cleared out. The mall was once again just a mall, and Trump was off to stir someone else’s pot. 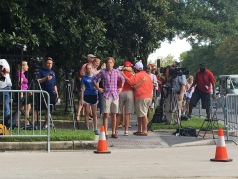 Donald Trump supporters speak to the media and face protesters at a fundraiser in Houston June 18.

Crowds of people outside of The Woodlands Waterway Marriott, where Donald Trump held a rally June 18. 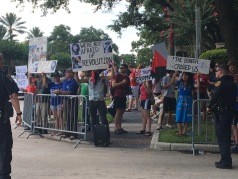 Susan Edwards, her husband and their Yorkie, Ms. Veronica, speak to the media outside of a June 18 Donald Trump fundraiser in Houston.

Trump supporters, right, debate protesters, on far side, outside of a rally in The Woodlands June 18 while a law enforcement officer stands between the two sides.

Jacob Mingear, 22, said Trump pointed him out and asked him to stand up for the audience at his rally in The Woodlands June 18. “There’s a movement of LGBT that’s moving towards Trump,” he said.